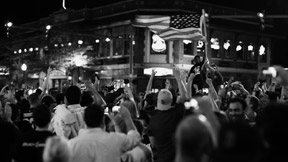 [Director’s Statement] In early 2010 I read a report stating that, nine years into the longest war in US history, only 4% of the US media made any reference to the war. By the end of the 2011 it was down to 2%, despite these being the deadliest years in the war to date. At its most exacerbated phase we were paying the least heed to the war, and I too felt that I was contributing to the national silence. Beyond those things I could think to do as a citizen, I became convinced that I must do something as a maker.

Drawing inspiration from the landmark 1967 omnibus film Far From Vietnam, I began reaching out to a diverse group of some of the most politically engaged and talented U.S. filmmakers I knew. With the eventual help of hundreds of volunteers, a 90-minute edit entitled Far from Afghanistan (The October Edition) was streamed on two separate websites on the 10th anniversary of the war—October 6th, 2011—for a one-week period, garnering thousands of views. This “October Edition” had only one public screening, a memorable showing at YIDFF 2011.

Shortly thereafter, after consultation with the team, I decided that some segments could be enhanced by further editing. Additionally, I succeeded in developing a rapport with a group of young Afghan journalists in Kabul called Afghan Voices. Through emails and Skype, Soon-Mi Yoo and I conveyed our desire for images of life in Afghanistan beyond those few captured by military-imbedded journalists in battle areas. We asked if they might be able to bring to us images of the ways individuals in various parts of the country were coping despite decades of war.

The final incarnation of the film received its world premiere in 2012 at the Locarno International Film Festival, and continues to make its way into the world. In my view, it is a richer, more heart-breaking, conscience-enraging film than the first version seen two years ago in Yamagata.


John Gianvito: My Heart Swims in Blood
Filmmaker, teacher, and curator based in Boston. John Gianvito’s films include dramatic features like The Mad Songs of Fernanda Hussein (2001) and documentaries like Profit Motive and the Whispering Wind (2007) and Vapor Trail (Clark) (2010, YIDFF 2011), which explored the impact of the U.S. military presence in the Philippines.

Soon-Mi Yoo: Afghanistan: The Next Generation
Korean-born Soon-Mi Yoo explores marginalized histories through her work with various media including photography, film, installation, and text. Her films include ISAHN (2004), Dangerous Supplement (2006), and Pink (2011).

Minda Martin: The Long Distance Operator
Minda Martin is a director and producer of personal documentaries and narrative films that explore the underpinnings and disparities of social class in the United States. Her films include a.k.a. Kathe (2000), Monsoon St., ’77 (2006), and Free Land (2009).

Travis Wilkerson: Fragments of Dissolution
After meeting with legendary Cuban filmmaker Santiago Álvarez, Travis Wilkerson has been making films in the tradition of the political “third cinema.” His films include An Injury to One (2002), Accelerated Devlopment—In the Idiom of Santiago Álvarez (1999, YIDFF’99), and Distinguished Flying Cross (2011, YIDFF 2011).