The filmmakers rushed to the site of the disaster right after the 921 earthquake in 1999 and filmed in an indigenous Tayal village for six years. Days of uncertainty as the community is faced with the challenges of relocation and reconstruction.

6. We Common People and the Land

A farmer uses oxen to plow the rice fields, beating old cotton for new quilts as a side business. An old couple speaks of long years together in extreme poverty. A grandpa’s modest moment of joy is singing old Japanese pop songs. The life and times of bodies that labored through storm and drought.

7. The Delights of Old Age 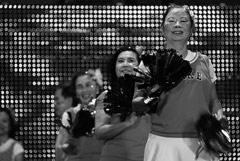 A cheerleading team with an average age of seventy shakes their pompoms and dances to the music in defiance of illness and protective family members. An archetypal sports movie with tears and joy.

As Life, As Pangcah

An early short introducing the world of a Pangcah elder and a feature depicting how the ancient rite of passage involving heavy drinking is carried on to younger generations. We see the dilemmas and convictions of indigenous people searching for identity in contemporary Taiwan.